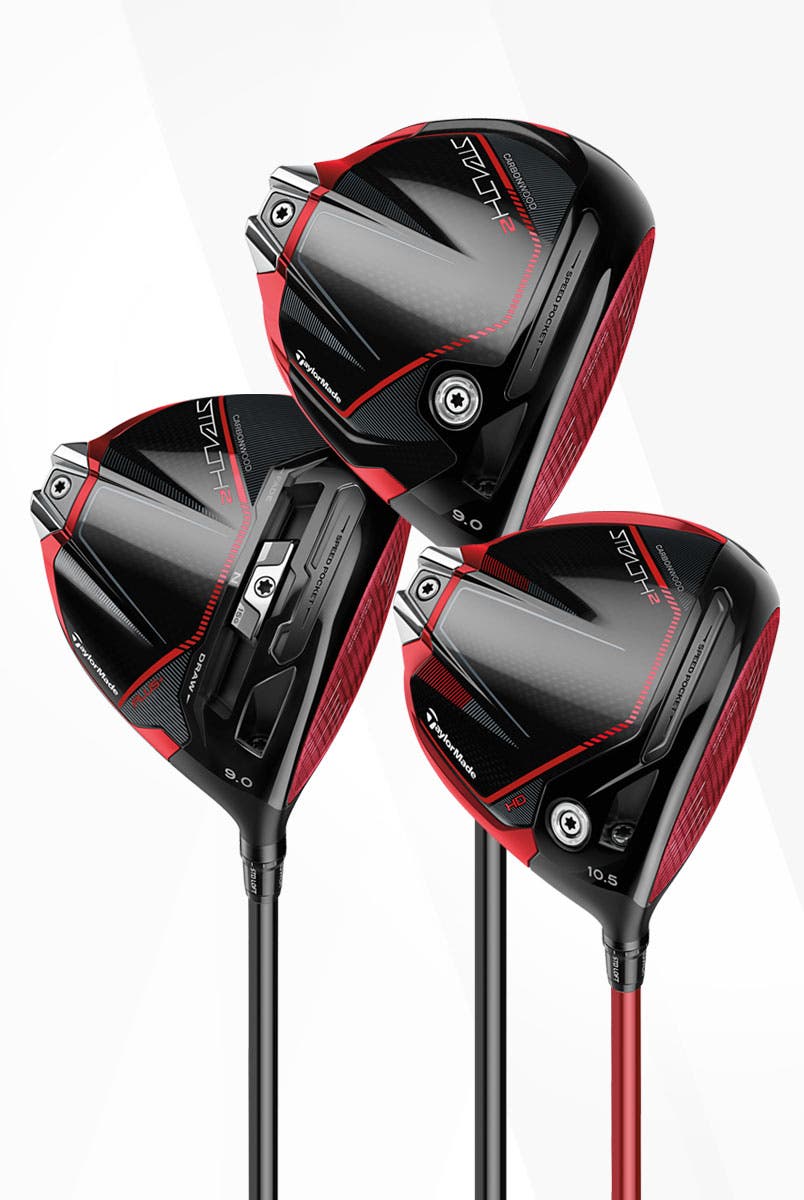 The TaylorMade Stealth 2 Driver is a highly versatile weapon off the tee, and boasts a number of characteristics that make it a good fit for nearly every golfer. One technological highlight is the new 60X Carbon Twist Face, which optimizes the energy transfer of the clubface at impact and produces increased ball speeds.

The lowest-spinning driver model in the Stealth 2 stable, the TaylorMade Stealth 2 Plus Driver is an excellent option for highly-skilled golfers and those looking to bring their spin rate down. These golfers will also appreciate the adjustability of this club, as it features a 15-gram weight that can be moved across the face to tweak their ball flight at will.

The shot that potentially strikes the most fear into the heart of mid-to-high handicap golfers is the slice. To counteract this miss, TaylorMade embedded a draw bias into their new Stealth 2 HD Fairway Wood. Along with a larger, low-profile sole, this club offers the golfer an enticing, confidence-inspiring aesthetic that aids them in getting the ball airborne.

The combination of a large, 50-gram sliding weight and a 2° loft sleeve makes the TaylorMade Stealth 2 Plus Fairway Wood one of the most adjustable fairway woods in golf. Ideal for the lower-handicap golfer, this is a low-spinning club designed to offer workability without reducing one yard of distance for the better player. 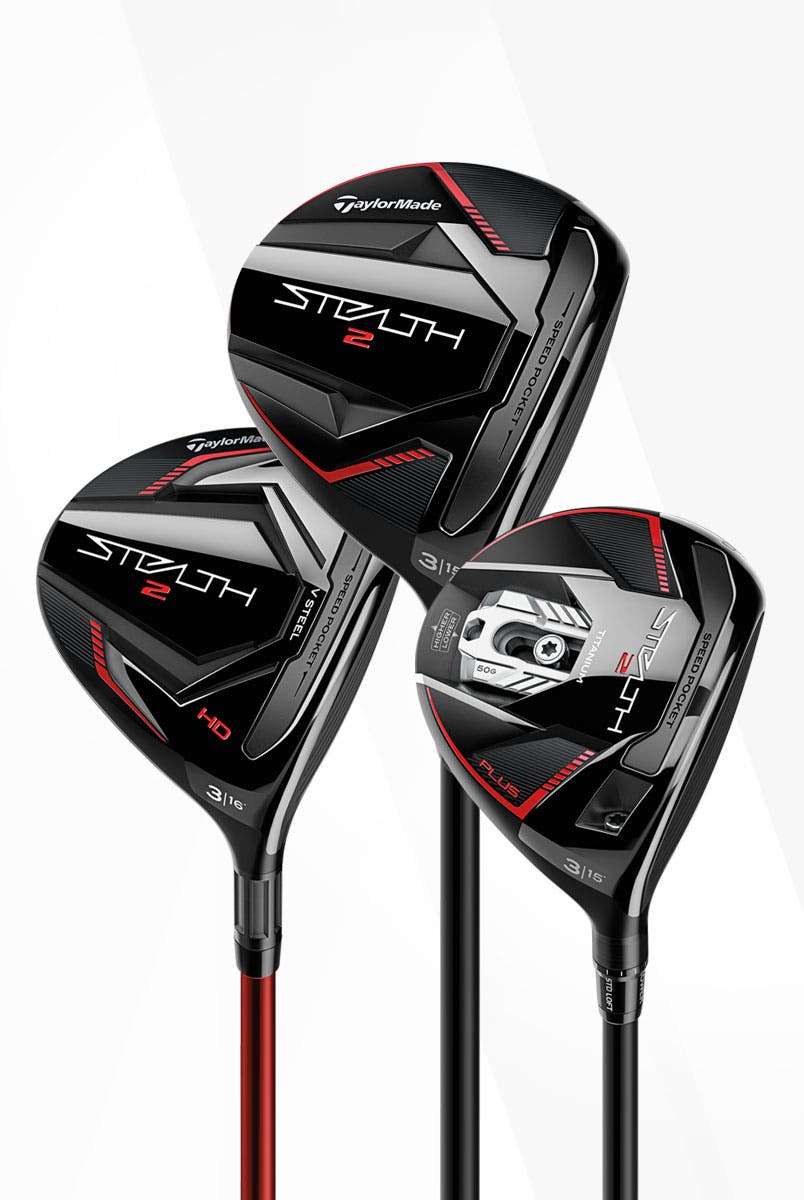 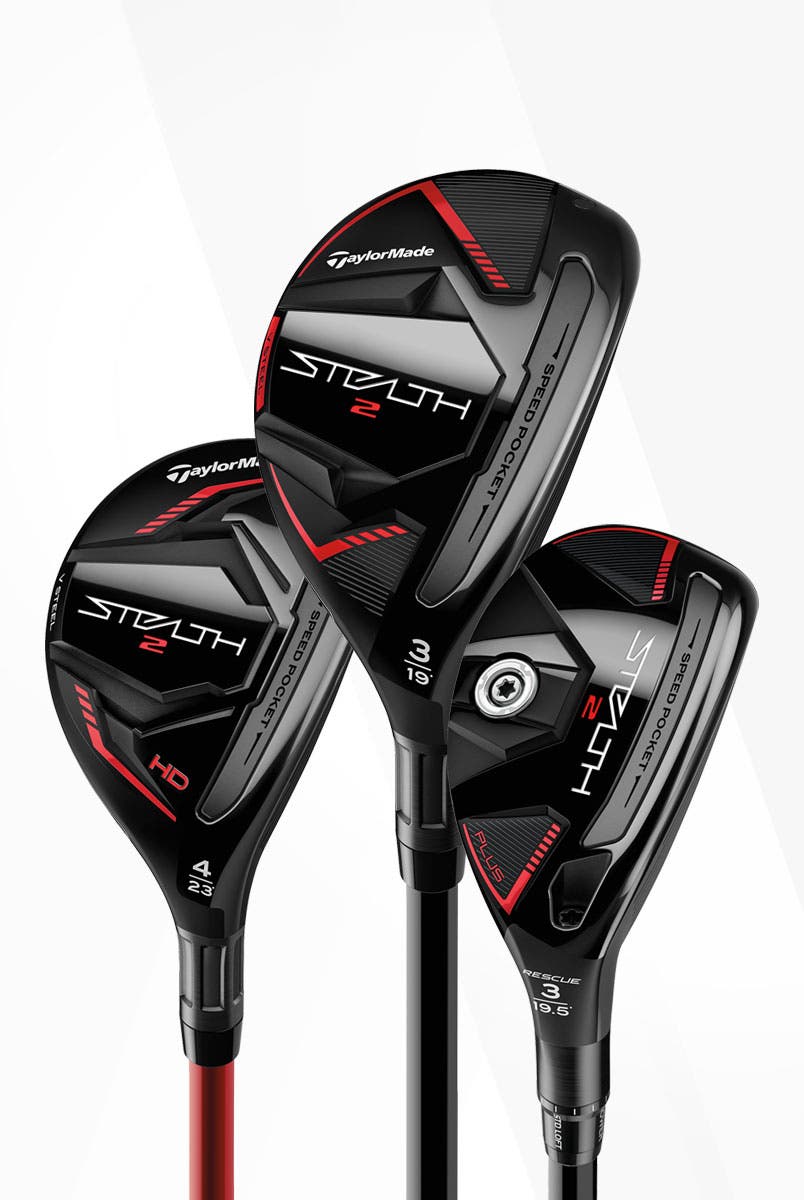 Stealth 2 Rescue PRE ORDER
Stealth 2 Plus Rescue PRE ORDER
Stealth 2 HD Rescue PRE ORDER
Mirroring much of what makes their new drivers and fairway woods so excellent, the three TaylorMade Stealth 2 rescue models offer golfers an extensive menu of options to choose from. Bridging the gap between your irons and fairway woods has never been easier thanks to these clubs’ innovative V Steel Sole Design. This iconic TaylorMade technology continues to deliver unmatched turf interaction and versatility, two of the most important characteristics a rescue can have.

As with the fairway woods, the Advanced Inverted Cone Technology maximizes the ball speed across the face of all three Stealth 2 rescue models. The TaylorMade Stealth 2 Rescue is situated in the “Goldilock” zone, as its blend of forgiveness, distance, and versatility make it an effective option for almost every golfer. That club’s more forgiving brother is the Stealth 2 HD Rescue, which boasts a slightly larger profile, making it more appealing for higher-handicap golfers. Finally, the TaylorMade Stealth 2 Plus Rescue offers the most workability and control, setting it up best for the most skilled golfers.

Stealth Stealth HD Irons PRE ORDER
TaylorMade’s new Stealth HD Irons are some of the most forgiving in golf, and are a superb option for high-handicap golfers looking to hit the ball higher and farther. Engineered with a draw bias, these irons help counteract those who tend to slice their ball offline. Also, these irons’ shallow face height and wide sole help keep the CG low, making launching the ball into the air easier than ever before. A tweak to the curvature of the sole has further improved turf interaction at impact. Finally, the TaylorMade Stealth HD Irons boast the ECHO Damping System, a soft polymer blend with multiple contact points across the face. These contact points channel away harsh vibrations, creating a forged-like feel. 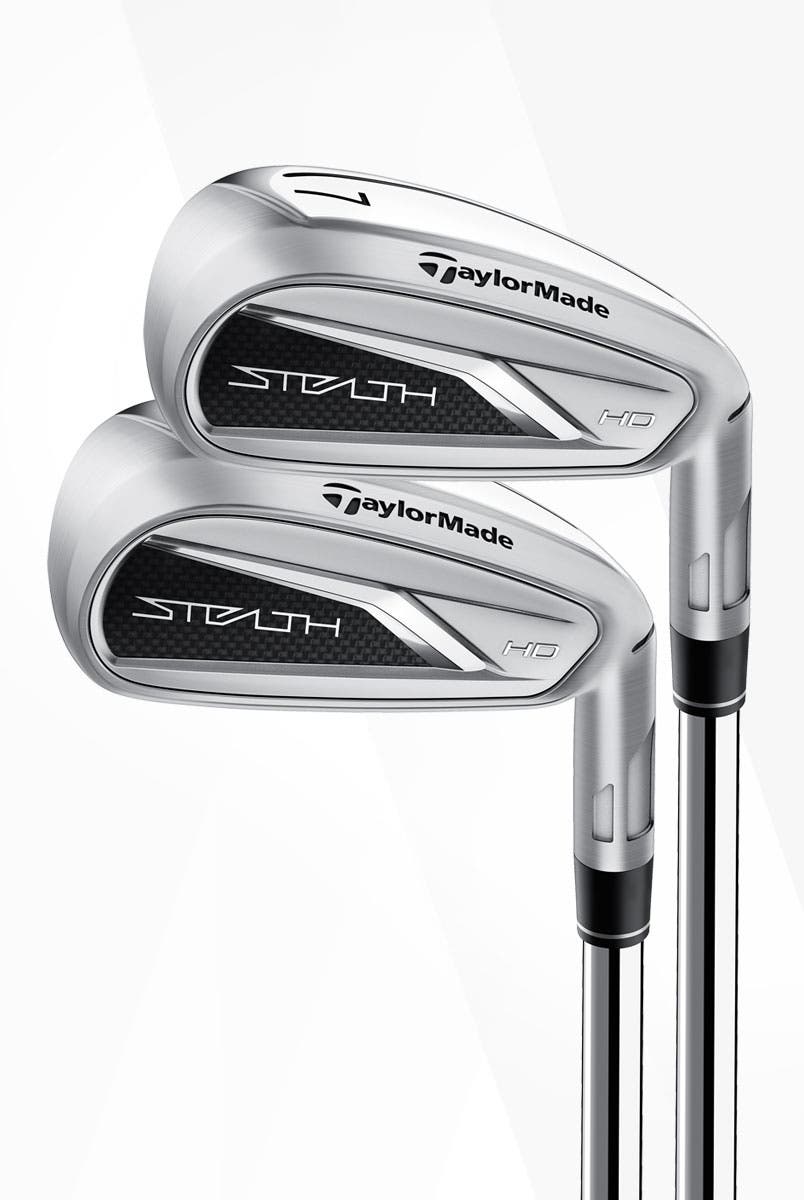 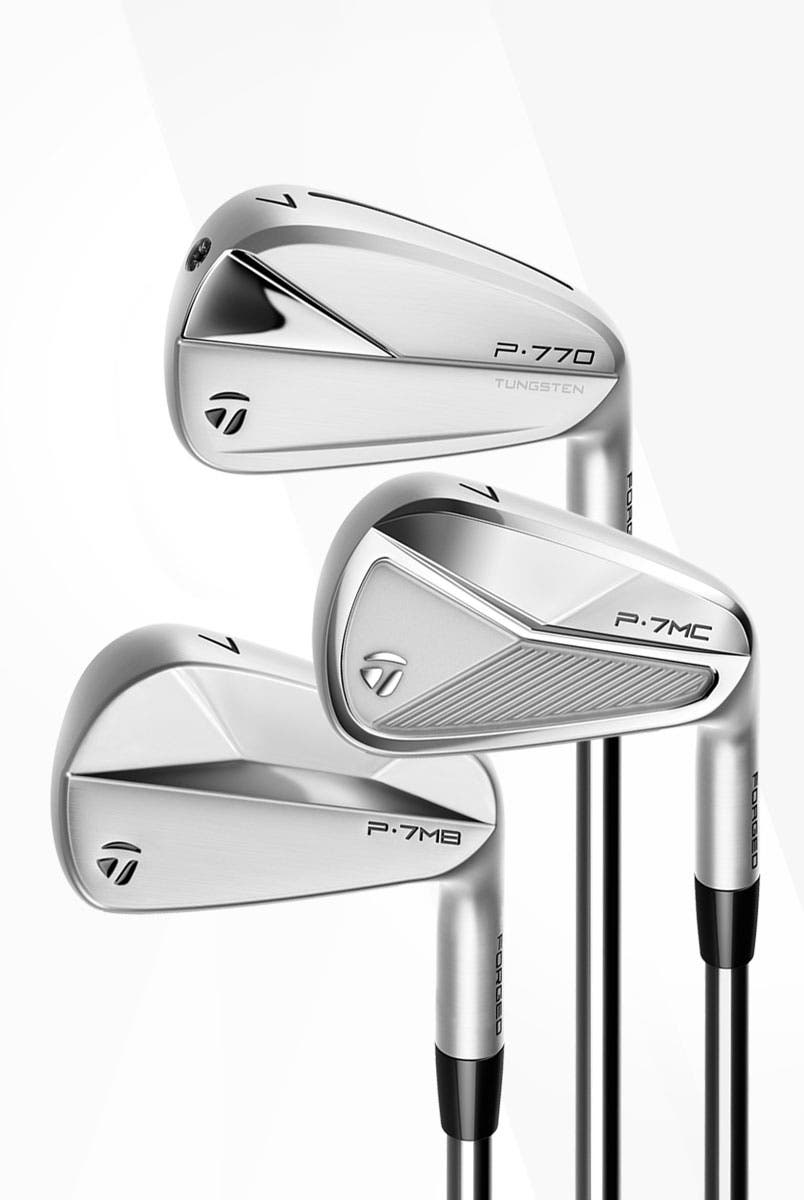 3 Models
Stealth P7 Series Irons Product Page
The 2023 TaylorMade P7 Series irons feature three distinct models that offer superb performance and beautiful aesthetics to the more skilled golfer. The 2023 P770 model represents an advancement on the highly-successful P770 that launched in 2020. New in the 2023 P770 is FLTD CG, which strategically places the center of gravity lowest in the long irons and progressively higher in the short irons. This design promotes forgiveness and distance where it’s needed most in the long irons, and promotes spin and control in the shorter irons.

Meanwhile, the 2023 P7MC and 2023 P7MB provide a buttery feel through a grain forging of 1025 carbon steel, which delivers a more compact, tighter grain structure. The result is a supremely soft feel that great ball-strikers prefer. Aside from that, the P7MC model delivers slightly more forgiveness through a meticulously constructed muscle cavity and subtle perimeter weighting. The P7MB, on the other hand, includes a traditional muscle back design with added contemporary elements that provide unmatched workability and feel.

While all three TaylorMade Stealth Driver models boast the new 60X Carbon Twist Face technology, each driver is designed with a different golfer in mind. The TaylorMade Stealth Driver produces a mid-high launch with mid-low spin numbers, making it an ideal fit for a wide range of handicaps. On the other hand, as a low spinning option, the Stealth Plus+ Driver is built for low and middle handicap golfers. Finally, the draw-biased Stealth HD Driver is perfect for high handicap golfers and/or golfers looking to correct a common slice. Whichever TaylorMade Stealth driver model suits you the best, the manufacturer’s new carbon technology is worth investigating for golfers of all skill levels. 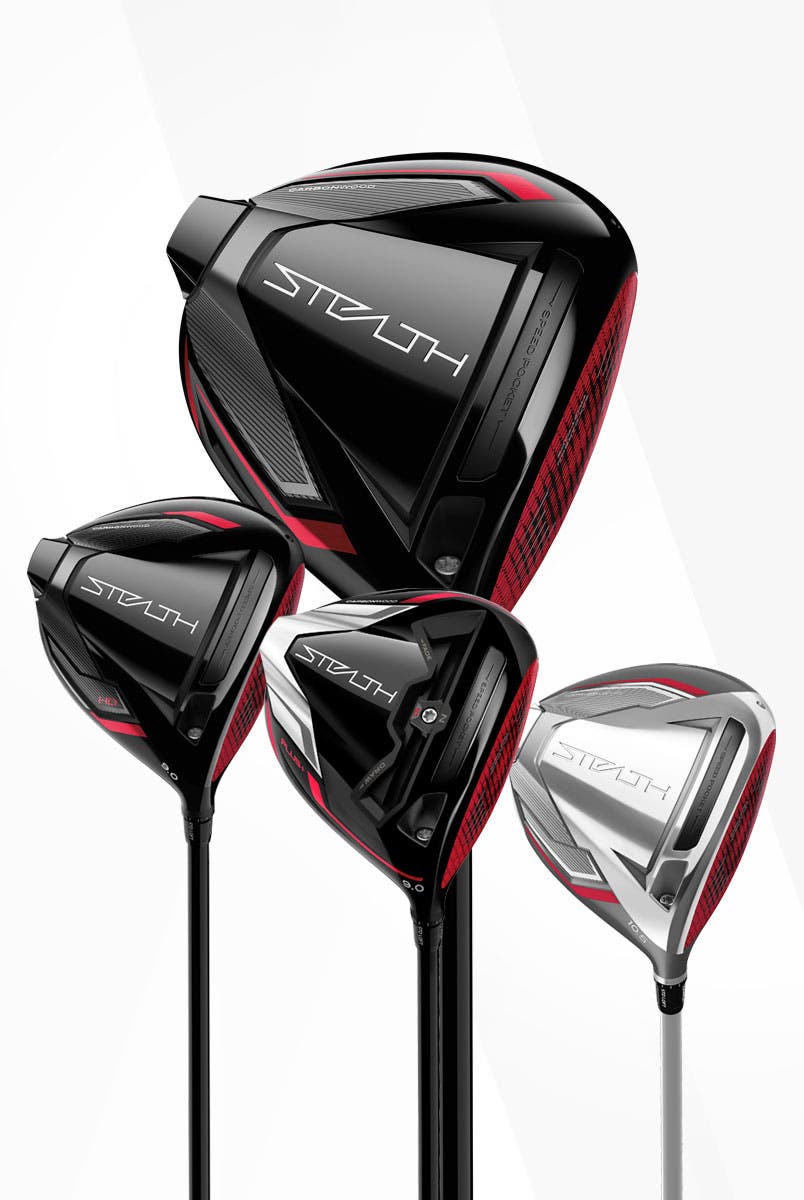 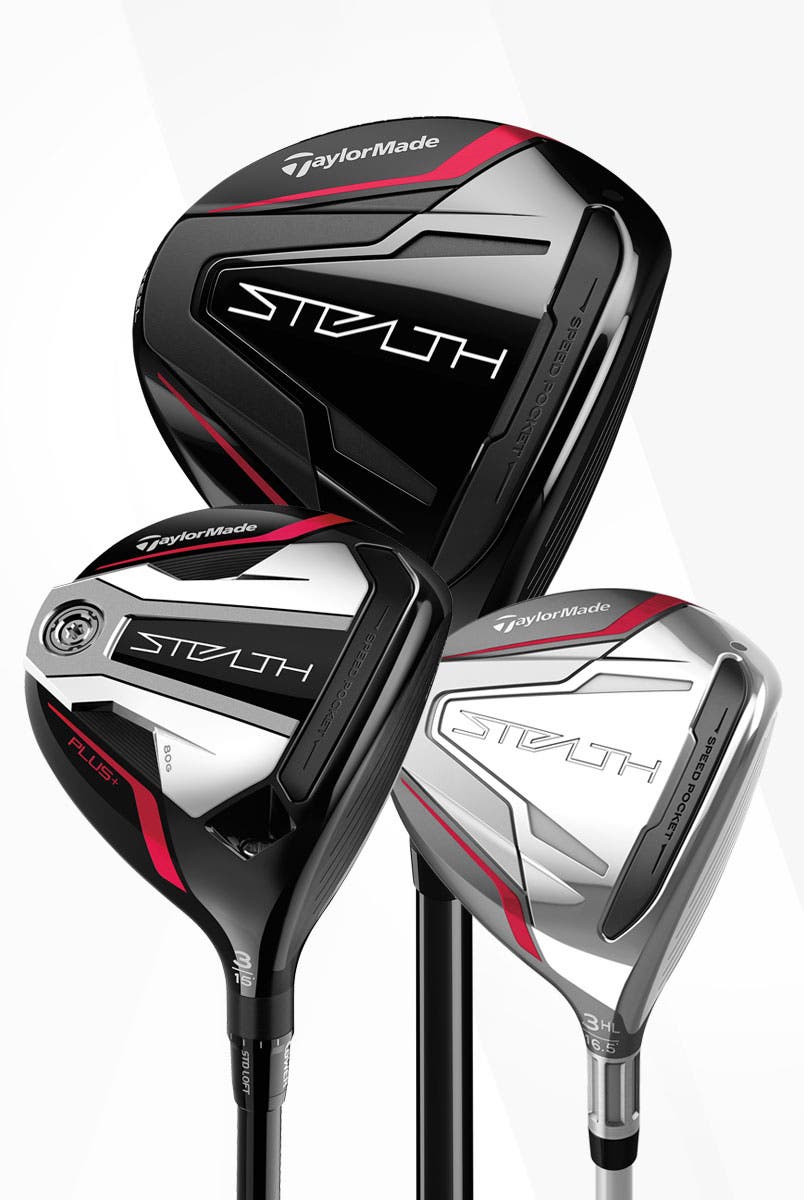 Improved Contact on Mis-Hits
Stealth Fairway Woods Product Page
The new TaylorMade Stealth Fairway Wood line features two models, each of which offers similarly cutting-edge technology, even while both are aimed at different types of golfers. A step above the popular SIM2 fairway woods, the Stealth and Stealth Plus+ Fairway Woods are the latest and greatest from one of golf’s top equipment manufacturers. The low-spinning TaylorMade Stealth Plus+ Fairway features a slightly more compact profile than its counterpart, making it a terrific option for higher-skilled golfers. Conversely, the higher-launching, more forgiving TaylorMade Stealth Fairway will fit into a wide variety of golfers’ bags and will likely be the preferred option for most middle and high handicappers.

The headlining tech addition to the TaylorMade Stealth Plus+ Fairway Wood is its 80g V Steel Sole Plate. By reengineering the mass distribution of the sole, TaylorMade engineers managed to maximize the forgiveness, turf interaction, and versatility of the Stealth Plus+. The driving innovation of the TaylorMade Stealth Fairway Wood is its 3D Carbon Crown. A weight-saving addition to the fairway metal, the 3D Carbon Crown allowed TaylorMade engineers the chance to shift more weight backward, a move that enhances both forgiveness and playability.

Adjustability is one of the better player’s most desired characteristics as it relates to metal woods, hybrids included. With a +/- 1.5° loft sleeve, a golfer can alter the face angle of the Stealth Rescue Plus+ at will, allowing them to optimize their trajectory with the twist of a wrench. One major technological aspect of the TaylorMade Stealth Rescue is the hybrid’s new Carbon Crown. By saving 7g of weight, the crown let TaylorMade engineers relocate the excess mass to increase MOI, thereby increasing the club’s forgiveness. 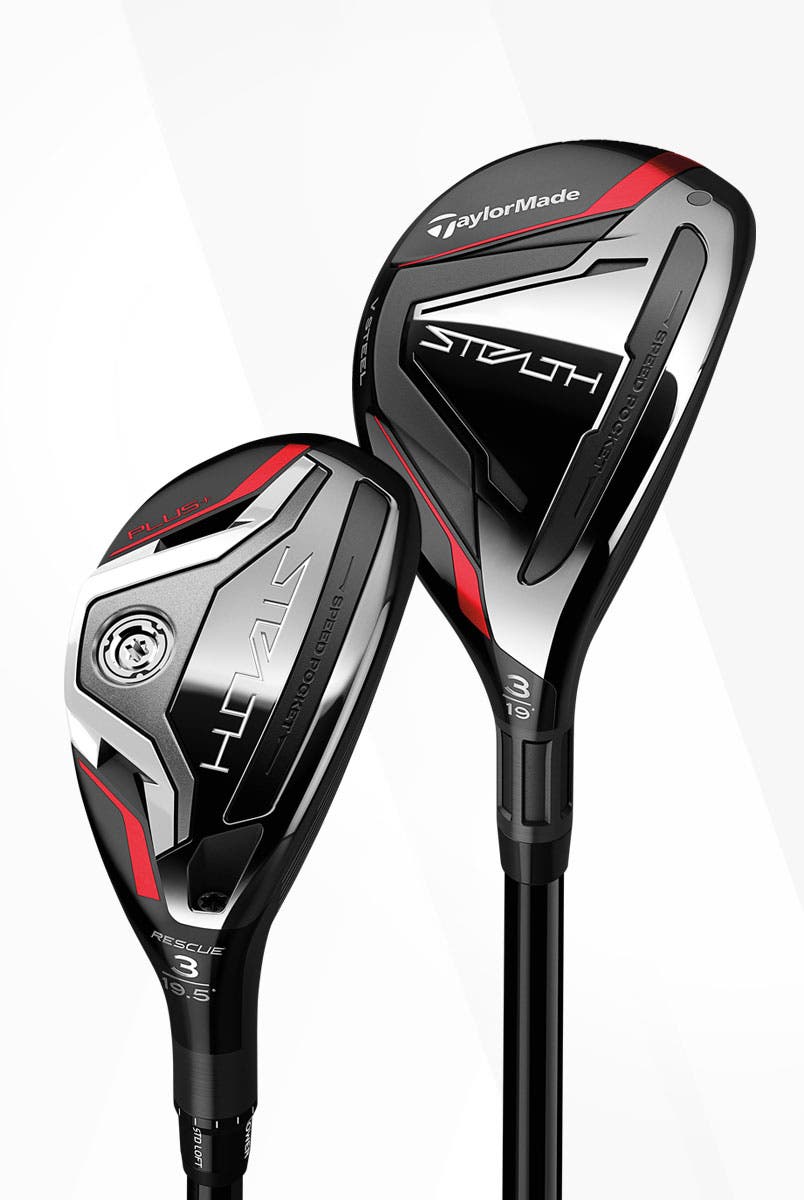 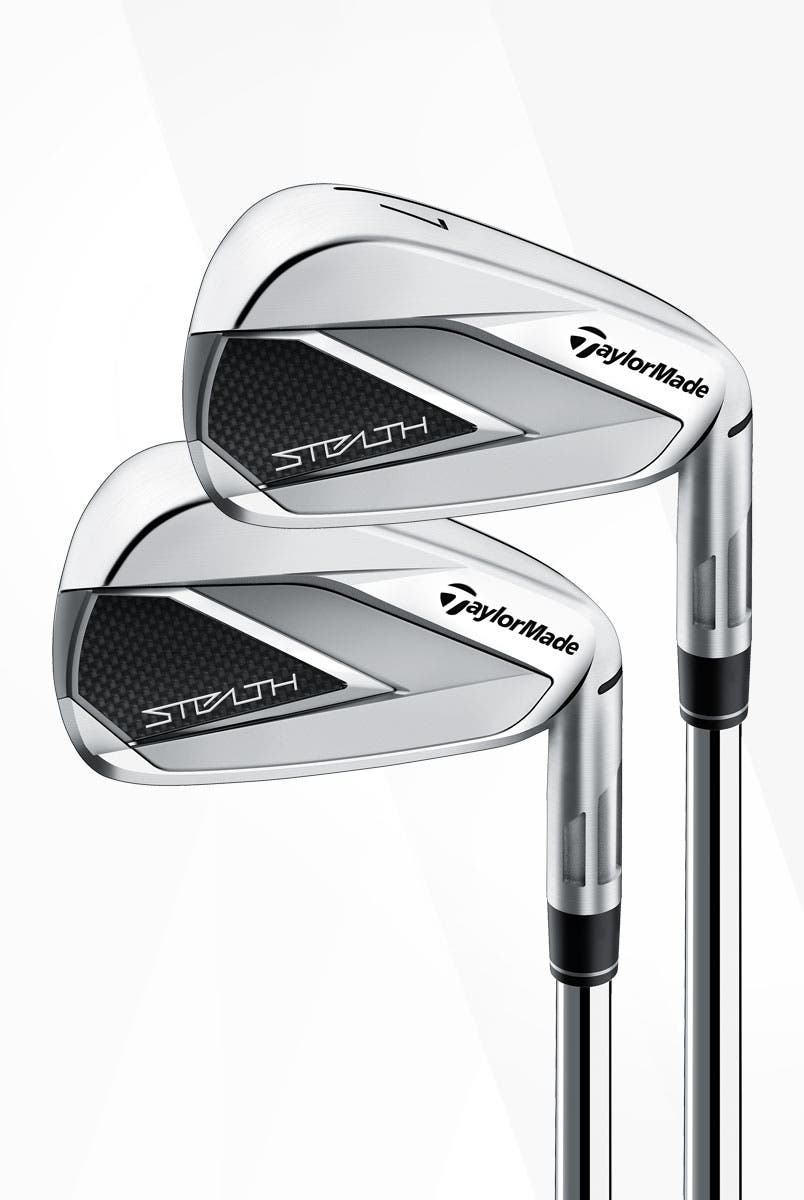 Improved Contact on Mis-Hits
Stealth Iron Sets Product Page
The new TaylorMade Stealth Irons are the newest game-improvement iron set from a manufacturer that consistently produces powerful and forgiving clubs. Every one of the new technological features in these irons works in concert to help golfers improve their iron play Specifically, as their game-improvement category status suggests, the TaylorMade Stealth Irons are built with middle and high handicap golfers in mind. A large, confidence-inspiring profile and substantial playability make this iron set an excellent option for those who typically struggle with their iron play.

Thanks to its innovative Cap Back Design and toe wrap construction, TaylorMade’s engineers substantially increased the distance and forgiveness of the Stealth Irons without compromising on feel. The feat was accomplished by shifting weight away from the toe throughout the rest of the sole to lower CG and increase launch. Equipped with a 450SS face, the Stealth Irons boast another explosive layer of ball speed potential and consistency, even on mis-hit strikes. Finally, the ECHO Damping System behind the clubface utilizes a polymer blend to remove vibrations and bolster the feel of the TaylorMade irons.